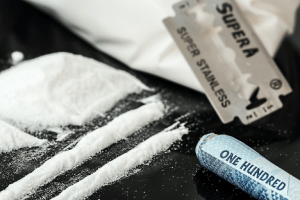 Cocaine is a drug that is used by people in a variety socio-economic status. It can be the homeless living in the street to the executive on Wall Street being able to function. Until it becomes totally debilitating Cocaine is a powerfully addictive. It is a stimulant drug made from the leaves of the coca plant native to South America.

It creates a sense of short-term euphoria, energy, and talkativeness in addition to potentially dangerous physical effects like raising heart rate and blood pressure. Some people have been known to show up at hospital emergency rooms thinking they were having a heart attack.

The powdered form of cocaine is either inhaled through the nose (snorted), where it is absorbed through the nasal tissue, or dissolved in water and injected into the bloodstream.

6 Things to Know About Cocaine Addiction

Have you heard of Crack? Crack is a form of cocaine that has been processed to make a rock crystal (also called “freebase cocaine”) that can be smoked. The crystal is heated to produce vapors that are absorbed into the blood-stream through the lungs. (The term “crack” refers to the crackling sound produced by the rock as it is heated.)

The effect and the length of time of cocaine’s pleasurable effects depend on the way it is used. The high from snorting cocaine may last 15 to 30 minutes; the high from smoking may last 5 to 10 minutes.

Cocaine affects the body in a variety of ways. It constricts blood vessels, dilates pupils, and increases body temperature, heart rate, and blood pressure. It can also cause headaches and gastrointestinal complications such as abdominal pain and nausea. Because cocaine tends to decrease appetite, chronic users can become malnourished Serious health concerns are:

How Does Culture View Cocaine?

History and use over time

Cocaine gained prominence in the 1880s. Sigmund Freud broadly praised its uses, including in overcoming morphine addiction and treating depression.

Viennese ophthalmologist Carl Koller performed the first operation using cocaine as an anesthetic on a patient with glaucoma, which led to its use as a local anesthetic.

But, soon after, practitioners began reporting side effects. Cocaine doses were administered at such high concentrations that there were 200 cases of intoxication and 13 deaths (in around seven years) as a result.

The cost is amazingly different depending on location. I found the chart below at https://www.statista.com/chart/18527/cocaine-retail-steet-prices-in-selected-countries/

After the resurgence of cocaine use in the 1970’s and 1980’s, it once again sort of died down some, but didn’t totally go away. There recent concerns about the popularity of cocaine is the potentially deadly effect it has when cut with fentanyl, a potent opioid. fentanyl, highlighting its deadly effects. It hasn’t yet become popular with cocaine, it very well could.

What Does the Bible Say About Cocaine Addiction?

The first time (about 40 years ago) that I read about the following truth “sorcery stems from the root word pharmakeia, which is also translated as witchcraft. When we find sorcery or witchcraft in the Bible, it refers to the use of drugs for hallucinogenic or mind-altering purposes.”

In an article on May 1, 1999, the ministry Focus on the Family had this to say.  “Do not get drunk on wine, which leads to debauchery. Instead, be filled with the Spirit” (Ephesians 5:18). The reason Paul gives for this instruction is that it leads to indulging passions without restraint, a.k.a. debauchery. He contrasts drunkenness with being filled with the Holy Spirit of God. The principle behind the passage is simply this: Stay away from stuff that will confuse your thoughts, weaken your inhibitions and make you more vulnerable to sin.

In the English Standard Version (ESV) of Bible the above verse reads as follows: “And do not get drunk with wine, for that is debauchery, but be filled with the Spirit.”

Before closing out this part of our discussion I want to share two more scriptures and a few thoughts then we will be done for this discussion about what the bible says in regards to addiction.

“9 But, as it is written, “What no eye has seen, nor ear heard,  nor the heart of man imagined, what God has prepared for those who love him”— 10 these things God has revealed to us through the Spirit. For the Spirit searches everything, even the depths of God. 11 For who knows a person’s thoughts except the spirit of that person, which is in him? So also no one comprehends the thoughts of God except the Spirit of God. 12 Now we have received not the spirit of the world, but the Spirit who is from God, that we might understand the things freely given us by God. 13 And we impart this in words not taught by human wisdom but taught by the Spirit, interpreting spiritual truths to those who are spiritual. 14 The natural person does not accept the things of the Spirit of God, for they are folly to him, and he is not able to understand them because they are spiritually discerned. 15 The spiritual person judges all things, but is himself to be judged by no one. 16 “For who has understood the mind of the Lord so as to instruct him?” But we have the mind of Christ.”

“9 Or do you not know that the unrighteous will not inherit the kingdom of God? Do not be deceived: neither the sexually immoral, nor idolaters, nor adulterers, nor men who practice homosexuality, 10 nor thieves, nor the greedy, nor drunkards, nor revilers, nor swindlers will inherit the kingdom of God. 11 And such were some of you. But you were washed, you were sanctified, you were justified in the name of the Lord Jesus Christ and by the Spirit of our God.” (Emphasis mine)

This scripture passage happens to be one of my favorites! At first it gives us a warning as to what is not allowed in heaven. Then there is hope! In verse eleven he says, “And such were some of you. I love that little word “were” right there.

You see, before any of us surrender our life, our desires, our sin to Jesus Christ, according to the list in the beginning of this passage, none of us would make it into Heaven. But God!

Once we repent and are transformed by the power of God’s Spirit, precious blood of we are no longer in the previous list. We were those things but now we are covered by the wonderful, blood of Jesus Christ. We become justified – “just as if I’d” never sinned. Thank you, God for your mercy towards me!

There is hope! You can be made brand new! “Therefore, if anyone is in Christ, he is a new creation. The old has passed away; behold, the new has come.” (2 Corinthians 5:17) Everything is made brand new!

In closing, whether it’s cocaine, alcohol or any other drug, why settle for recovery when you can be transformed? Why go back to being what you once were when you be made transformed? You can be brand new and have a fresh start in life. Once you become a Christ-follower, you no longer have to call yourself an addict, rather you are now a redeemed child and disciple of the Lord Jesus Christ!

Below I have listed some website resources used in this discussion for you as well as some biblically based residential programs for those who struggle with addiction.

WHERE TO GET HELP