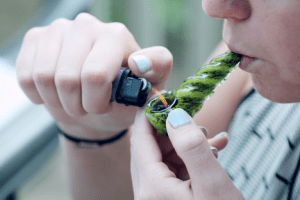 What are Synthetic Cannabinoids?

Synthetic Cannabinoids (K2/Spice) have been available in the United States since the early 2000’s. Created as a laboratory substitute for experimentation, Synthetic Cannabinoids is a man-made concoction of chemicals that mimic marijuana. These synthetized molecules are sprayed on plant matter such as tobacco or marijuana to be smoked or added as a liquid in vape E-pens to be consumed. At times, these synthetics are also brewed as tea.

Synthetic Cannabinoids are known by many names.

Chiefly, K2, or Spice. However, other names to be aware of include; Fake Weed, AK-47, Arizona, Black Mamba, Krypton, APINACA, XLR-11, Mr. Happy, and a wide variety of others. Often promoted as safe and legal substitutes for marijuana, they are often sold in three-ounce foil packages labeled as synthetic marijuana, Natural herbs, herbal incense, and herbal smoking blends.

Similar to THC in marijuana

The chemistry of Synthetic Cannabinoids is very similar to that of the THC (Tetrahydrocannabinol) in marijuana. The chemicals affect the same receptors in the brain as marijuana. This results in mind altering experiences that are more extreme than that of natural marijuana. The problem with Spice is that as it is a synthetic, and contains no actual plant matter in and of itself, it is several times more powerful than actual marijuana. Coupled with the fact that this concoction is not regulated, each batch that is produced will have a wide variety of potency.  Users of this drug will never know what to expect from any particular dosage.  This can have an alarming result in manifestation.

A wide variety of health problems occur with the risk of synthetic cannabinoids. Death can occur. Heart palpitations, heart attack, cognitive difficulties, seizures, suicidal thoughts, anger, high blood pressure, kidney failure, and gastrointestinal problems.  Being that synthetic Cannabinoids are relatively new, there is little research completed as to the long-term effects of their use. As with any substance, Spice can become habit forming, and potentially addictive.

Manufactures, to keep away from legal ramifications, will often vary the chemical makeup of the mixture to avoid regulation. Often, this “drug,” can be purchased in convenience stores, flea markets, and smoke shops. This legal designation often causes users to presume that the product is safe. However, many states have classified Synthetic Cannabinoids as a class 1 drug, and have laws against use and possession.  Because manufacturers constantly change the makeup of this drug, and label the packages, “not for human consumption,” loopholes exist for its availability.   Several plant bases are used in the creation of Spice.  Manufactures use a variety of fillers and synthetics to produce Synthetic Cannabinoids. In March of 2018, rat poison was found in several Illinois doses causing severe bleeding in those who used it. Four people died as a result.

Effect in the Body

Users of Synthetic Cannabinoids compare the results to that of marijuana, citing relaxation, blissful mood, and a mind altered perception. However, being a synthesized chemical drug, a more powerful effect can be up to one hundred times stronger than that of true marijuana.

In the world, Spice finds acceptance among many people. Assuming it to be harmless or controllable, and sometimes legal, people will use it as what they believe a safe alternative to marijuana.

Rapidly metabolized in the body

In 2018 a survey was produced entitled the 2018 Monitoring the Future Survey.  This survey found that among high school students, Spice was the second most common drug used, following that of natural marijuana. The report states roughly 36% of U.S. high school seniors reported past year use of natural marijuana, while 3.5% reported use of synthetic cannabinoids. In fact, rates of synthetic marijuana use have been declining since 2012 when it was at its highest; in 2012, 11.3% of high school seniors reported use of Spice or K2. These numbers are not surprising considering the increased legal status of recreational marijuana in the U.S., and the continued illegal classification of synthetic cannabinoids.

Turning to anything other than God as a means of coping and dealing with life is idolatry, especially when a person manipulates the rules of behavior. That is to say, he makes excuses, always shifting blame and playing the victim. He is also willing to sin to pursue the pleasure. This may come in the form of theft to pay for the drugs, or even violence against another person. The idolizer of Spice clearly rejects the help and hope that God offers.

“For what can be known about God is plain to them, because God has shown it to them.    For his invisible attributes, namely, his eternal power and divine nature, have been clearly perceived, ever since the creation of the world, in the things that have been made. So they are without excuse. For although they knew God, they did not honor him as God or give thanks to him, but they became futile in their thinking, and their foolish hearts were darkened. Claiming to be wise, they became fools, and exchanged the glory of the immortal God for images resembling mortal man and birds and animals and creeping things. Therefore God gave them up in the lusts of their hearts to impurity, to the dishonoring of their bodies among themselves, because they exchanged the truth about God for a lie and worshiped and served the creature rather than the Creator, who is blessed forever! Amen.”

Addiction is a habituated response to the pressures of life.

It is a learned outcome of pleasure following a stimulus-response pattern.  The person has a problem, they feign help from God or responsibility, and to ease the pressures of life, they participate in a short-term relief with long term consequences.

In this passage, the person in question rejects God.  He is without excuse. Yet, he chooses to submit to whatever will please him for the moment, rather than embracing the eternal God. God offers help to the person, yet they spur god and seek worldly solutions.  Here they are in control.  Not God.  Such is idolatry at its most basic level.

Thus, by actually idolizing himself, the user of K2 chooses to not honor God but to follow a route of behavior that avoids responsibility and numbs the failures and criticisms of his actions by momentarily seeking a euphoria brought on by the Synthetic Cannabinoid. This is what Romans 1:21 points to when it states that a person knows God exists, simply by the world around him. Rejecting any notion of seeking help from God, he chooses to be the captain of his fate. Such a person relies on his own strength, wit, and abilities.

Hence, an addict will reason that he can handle just one more time.  Such thinking darkens the heart. The heart moves further and further away from what they truly need, only to fulfill a spiritual death in separation from God.

After a pattern of rejecting God, it can seem quite impossible to shake the idol of the heart.  The person may even switch from one idol, in image for another.  That is to say, a person may go from K2 to harder drugs, or even seemingly an improvement, from Spice to cigarettes. This is only trading one coping mechanism of idolatry for another.

Addiction is disordered and displaced worship

Essentially, God points out that in addictions, people exchange the truth of God for a lie.  They worship the substance (Creation) rather than the Creator Himself.

As stated above, the use of Spice becomes idolatry when the user makes excuses, is willing to sin to pursue the pleasure, and rejects the help and hope that God offers. Here, God is not being glorified, the substance is.  It is as if the user is using Spice as a means of saying, “My life will be fine as long as I can enjoy my drug.”

“Since therefore Christ suffered in the flesh, arm yourselves with the same way of thinking, for whoever has suffered in the flesh has ceased from sin, so as to live for the rest of the time in the flesh no longer for human passions but for the will of God. For the time that is past suffices for doing what the Gentiles want to do, living in sensuality, passions, drunkenness, orgies, drinking parties, and lawless idolatry. With respect to this they are surprised when you do not join them in the same flood of debauchery, and they malign you; but they will give account to him who is ready to judge the living and the dead.”

How Do I Know I’m Addicted?

Ask yourself the following questions to understand if you need to get help;

Are my ways of coping with life God honoring or am I seeking to live in my own strength?

At the core, addition to spice is a heart issue. Rather than glorifying God with your heart, mind, and body, the will of God is disregarded.  Users may say something by their actions such as, “My body, my rights.” This defiant attitude fails to see that love that God has demonstrated, even for the worst sinner, by sending His Son to take the wrath of God upon the cross that not only may he be forgiven, but given life abundantly.

How to cope with life

Users of spice, as stated above, do so to cope with life. But Christ offers Himself as the greatest means of coping with life’s problems as we can learn from Isaiah 55:3 and Matthew 11:28.

“Incline your ear, and come to me; hear, that your soul may live; and I will make with you an everlasting covenant, my steadfast, sure love for David.” (Is. 55:3)

It is to the glory and delight of God to take our iniquities and burdens of life away from us and upon Himself in order to show that He is as able and good God to overcome the power of sin.

A simple Google search will provide anyone with an overwhelming amount of advice on treatment programs. Mind you, these programs are from a secular viewpoint. However, since addiction is a heart issue, the Bible is the best path to freedom. Several Biblically based treatment centers can provide a person with the graceful care and restoration that they need. An addict may very well need a residential treatment center to provide the accountability, oversight, and intense discipleship that they need to overcome these life dominating sins.

Need Help with an Addiction?

Contact one of our Commissioned Addictions Biblical Counselors, or find a biblical program near you: we have a map of residential and non-residential programs.

Are you a leader wanting to help addicts? Check out this disciple-making curriculum we created just for you entitled Next Steps: Be TRANSFORMED.